Serve as a soldier isn’t only wearing a military uniform, walking with sturdy posture, while holding a gun on the arms. It’s about serving the country by all power even life without any hesitation. Here are some military quotes that make you proud of having them fought for your nation. Let’s commemorate their sacrifice in the wars that now giving us sleep peacefully.

Whoever said the pen is mightier than the sword obviously never encountered automatic weapons.
– Douglas MacArthur

People sleep peaceably in their beds at night only because rough men stand ready to do violence on their behalf.
– George Orwell

It is fatal to enter an war without the will to win it.
– Douglas MacArthur

Live for something rather than die for nothing.
– George Patton

There is nothing stronger than the heart of a volunteer.
– Gen. James H. Doolittle

The brave die never, though they sleep in dust: Their courage nerves a thousand living men.
– Minot J. Savage

These fallen heroes represent the character of a nation who has a long history of patriotism and honor.
– Michael N. Castle

The soldier is the Army. No army is better than its soldiers. The Soldier is also a citizen. In fact, the highest obligation and privilege of citizenship is that of bearing arms for one’s country
– George S. Patton Jr.

The object of war is not to die for your country but to make the other bastard die for his.
– George S. Patton

The most important thing I learned is that soldiers watch what their leaders do. You can give them classes and lecture them forever, but it is your personal example they will follow.
– General Colin Powell

In the military, you learn the essence of people. You see so many examples of self-sacrifice and moral courage. In the rest of life, you don’t get that many opportunities to be sure of your friends.
– Adam Driver 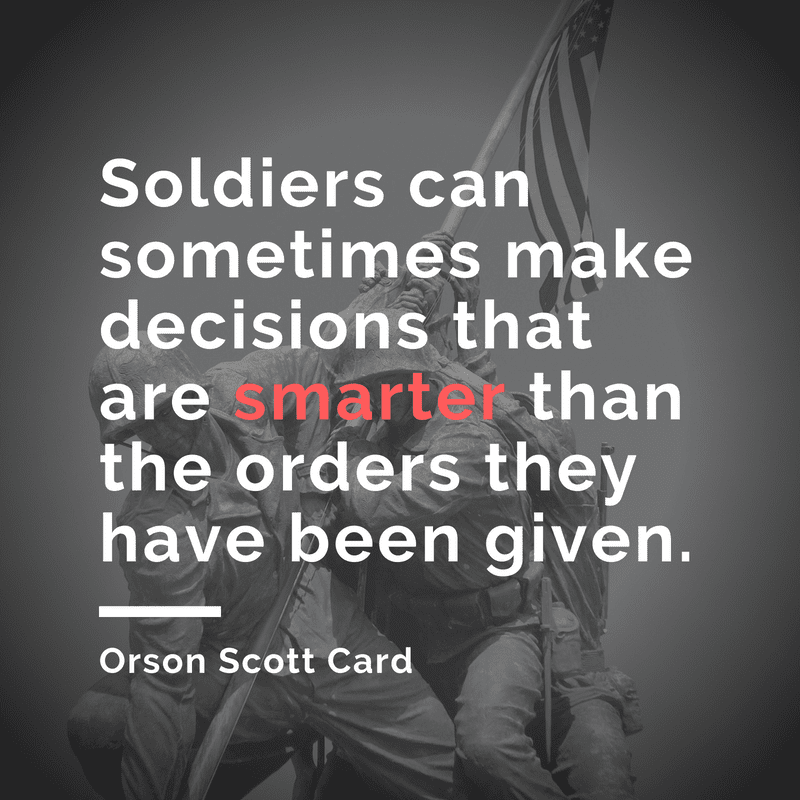 Soldiers can sometimes make decisions that are smarter than the orders they have been given.
– Orson Scott Card

The Army is the true nobility of our country.
– Napoleon Bonaparte

We sleep safely at night because rough men stand ready to visit violence on those who would harm us.
– Winston S. Churchill

There’s no quitting, I can’t have quit in me. There was never an option to stop and quit.
– Major Lisa Jaster

I destroy my enemies when I make them my friends.
– Abraham Lincoln

The harder the conflict, the more glorious the triumph.
– Thomas Paine

Battles are won by slaughter and maneuver. The greater the general, the more he contributes in maneuver, the less he demands in slaughter.
– Winston S. Churchill

On the battlefield, the military pledges to leave no soldier behind. As a nation, let it be our pledge that when they return home, we leave no veteran behind.
– Dan Lipinski

I only regret that I have but one life to give for my country.
– Capt. Nathan Hale

America without her Soldiers would be like God without His angels.
– Claudia Pemberton

In a man-to-man fight, the winner is he who has one more round in his magazine.
– Erwin Rommel

Military men are the scourges of the world.
– Guy de Maupassant

Money is my military, each dollar a soldier. I never send my money into battle unprepared and undefended. I send it to conquer and take currency prisoner and bring it back to me.
– Kevin O’Leary