Dozens of quotes about war gathered by the various author over the years. Many of them are inspirational words, wise, breathtaking, artistic, and humorous collection.

Happy nations have no history.
– Belgian (on war and peace)

God grant me a good sword and no use for it.
– Polish (on war and peace)

After the war, aid.
– Greek Proverb

War ends nothing.
– Zairean (on war and peace)

War is sweet to those who haven’t experienced it.
– Latin (on war and peace)

You can’t have peace any longer than your neighbor pleases.
– Dutch (on war and peace) 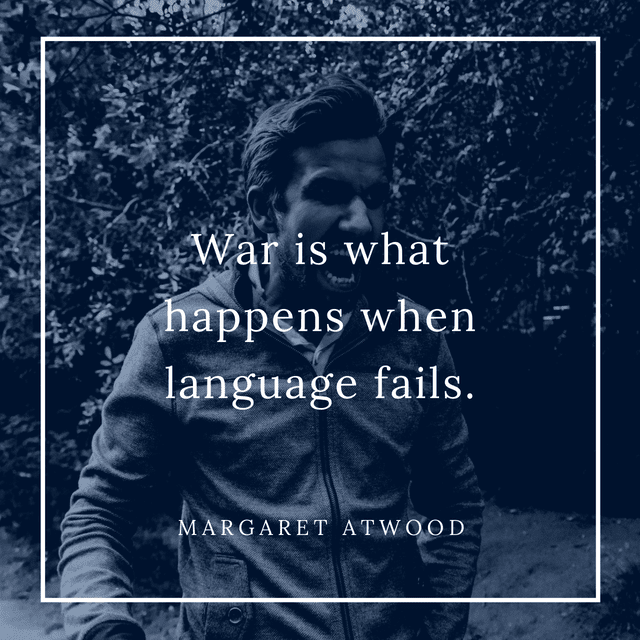 War is what happens when language fails.
– Margaret Atwood

Supreme excellence consists of breaking the enemy’s resistance without fighting.
– Sun Tzu, The Art of War

It’s hard to lead a cavalry charge if you think you look funny on a horse.
– Adlai E. Stevenson II 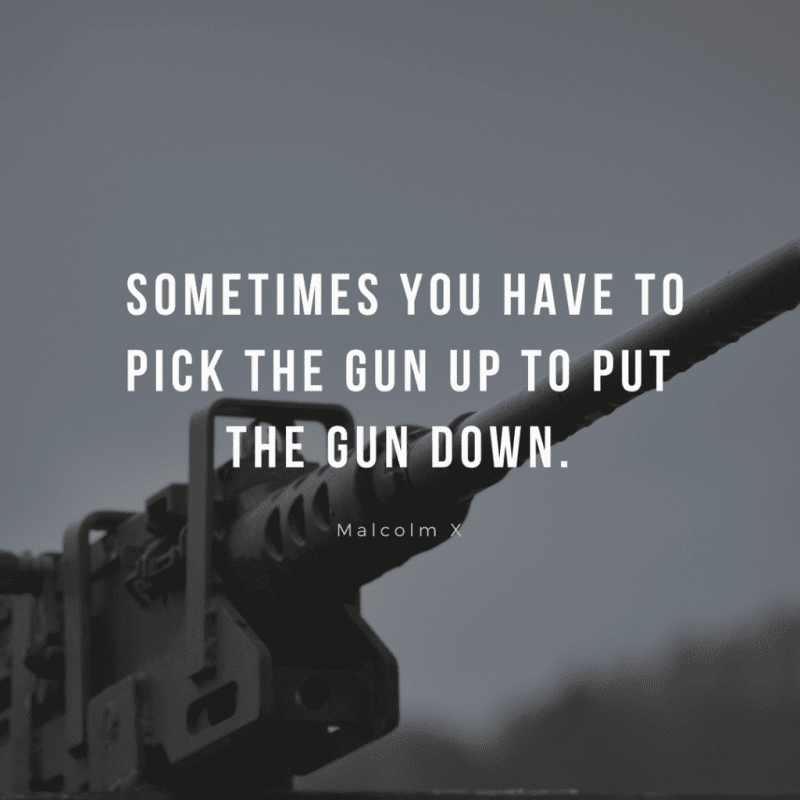 Sometimes you have to pick the gun up to put the gun down.
– Malcolm X

Let your plans be dark and impenetrable as night, and when you move, fall like a thunderbolt.
– Sun Tzu, The Art of War

Dad, how do soldiers killing each other solve the world’s problems?
– Bill Watterson

Imagination is the only weapon in the war against reality.
– Lewis Carroll

War does not determine who is right — only who is left.
– Unknown

All war is a symptom of man’s failure as a thinking animal.
– John Steinbeck

There is no flag large enough to cover the shame of killing innocent people.
– Howard Zinn

Never think that war, no matter how necessary, nor how justified, is not a crime.
– Ernest Hemingway

Listen up – there’s no war that will end all wars.
– Haruki Murakam

If you win, you need not have to explain…If you lose, you should not be there to explain!
– Adolf Hitler

There are perhaps many causes worth dying for, but to me, certainly, there are none worth killing for.
–  Albert Dietrich 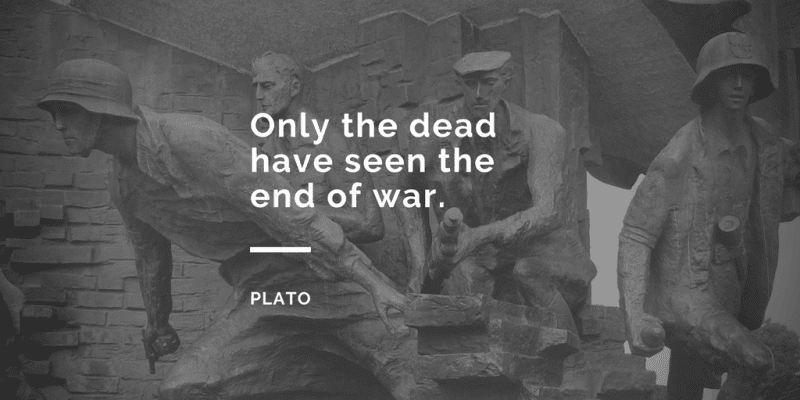 Only the dead have seen the end of war.
– Plato

Older men declare war. But it is youth that must fight and die.
– Herbert Hoover

It is forbidden to kill; therefore all murderers are punished unless they kill in large numbers and to the sound of trumpets.
– Voltaire

If everyone fought for their own convictions there would be no war.
– Leo Tolstoy

The nuclear arms race is like two sworn enemies standing waist deep in gasoline, one with three matches, the other with five.
– Carl Sagan

No one won the last war, and no one will win the next war.
– Eleanor Roosevelt

I came, I saw, I conquered.
– Gaius Julius Caesar

How can you have a war on terrorism when war itself is terrorism?
– Howard Zinn

It is not enough to win a war; it is more important to organize the peace.
– Aristotle

They wrote in the old days that it is sweet and fitting to die for one’s country. But in modern war, there is nothing sweet nor fitting in your dying. You will die like a dog for no good reason.
– Ernest Hemingway

Do you think it’s possible for an entire nation to be insane?
– Terry Pratchett

A wise man gets more use from his enemies than a fool from his friends.
–  Baltasar Gracián

Peace is more than the absence of war. Peace is accord. Harmony.
– Laini Taylor

War is over… If you want it.
– John Lennon

When the rich wage war it’s the poor who die.
– Jean-Paul Sartre

You can have peace. Or you can have freedom. Don’t ever count on having both at once.
– Robert A. Heinlein

The world is full enough of hurts and mischances without wars to multiply them.
–  J.R.R. Tolkien

To know your Enemy, you must become your Enemy.
– Sun Tzu

The enemy is anybody who’s going to get you killed, no matter which side he is on.
– Joseph Heller

And when all the wars are over, a butterfly will still be beautiful.
– Ruskin Bond

For the dead and the living, we must bear witness.
– Elie Wiesel

War doesn’t negate decency. It demands it, even more than in times of peace.
– Khaled Hosseini

It doesn’t make a damned bit of difference who wins the war to someone who’s dead.
– Joseph Heller 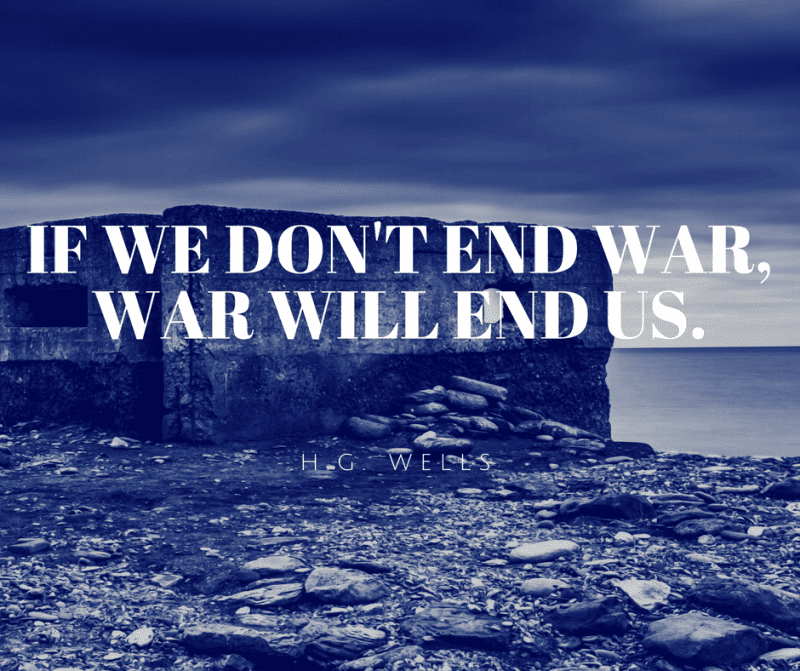 War was always here. Before man was, war waited for him. The ultimate trade awaiting its ultimate practitioner.
– Cormac McCarthy

May God have mercy for my enemies because I won’t.
– George S. Patton Jr.

Rules are for children. This is war, and in war the only crime is to lose.
– Joe Abercrombie

So the whole war is because we can’t talk to each other.
– Orson Scott Card

People who get up early in the morning cause war, death and famine.
– Banksy

War is like the new boss who expects the impossible.
– Markus Zusak

One mark of a great soldier is that he fight on his own terms or fights not at all.
– Sun Tzu

Violence is a disease, a disease that corrupts all who use it regardless of the cause.
– Chris Hedges

What had human beings become? Did war make us evil or just activate an evil already lurking within us?
– Ruta Sepetys

Every man should lose a battle in his youth, so he does not lose a war when he is old.
– George R.R. Martin

Sisters in battle, I am shield and blade to you. As I breathe, your enemies will know no sanctuary. While I live, your cause is mine.
– Leigh Bardugo

I dream of giving birth to a child who will ask, Mother, what was war?
– Eve Merriam

Battles are lost in the same spirit in which they are won.
– Walt Whitman

In War: Resolution,
In Defeat: Defiance,
In Victory: Magnanimity
In Peace: Good Will.
– Winston S. Churchill

War is not for winning, It is for surviving.
– Catherynne M. Valente 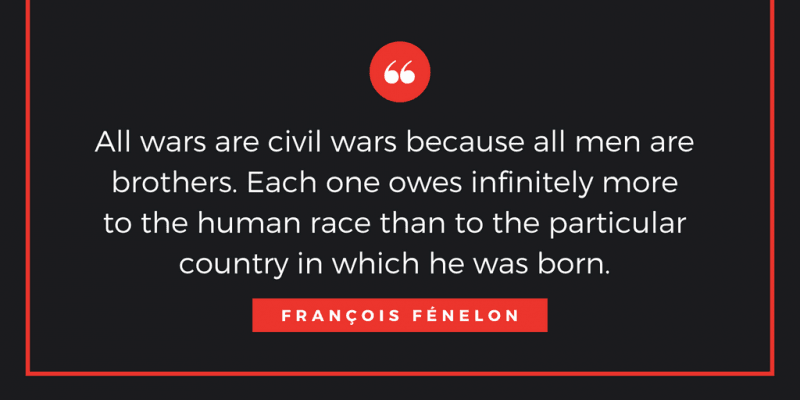 All wars are civil wars because all men are brothers… Each one owes infinitely more to the human race than to the particular country in which he was born.
– François Fénelon

One of the hardest parts of my job is to connect Iraq to the war on terror.
– George W. Bush

There is nothing that war has ever achieved that we could not better achieve without it.
– H. Havelock Ellis

Attack is the secret of defense; defense is the planning of an attack.
– Sun Tzu

In war, our elders may give the orders…but it is the young who have to fight.
– T.H. White

If your enemy offers you two targets, strike at a third.
– Robert Jordan 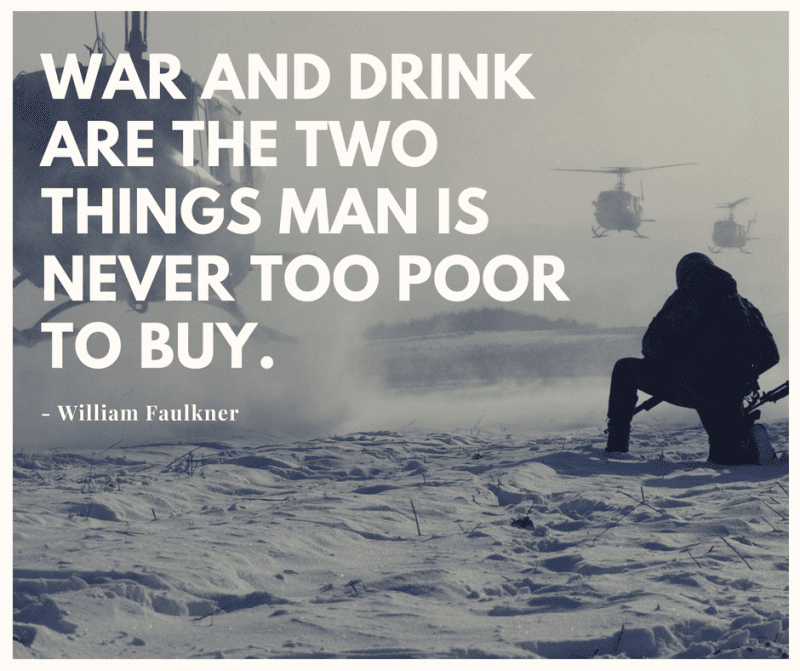 War and drink are the two things man is never too poor to buy.
– William Faulkner

We don’t like to kill our unborn; we need them to grow up and fight our wars.
– Marilyn Manson

War is only a cowardly escape from the problems of peace.
– Thomas Mann

Those who lived by the sword were forced to die by it.
– T.H. White

Those with the least always lose the most in war.
– Joe Abercrombie

A weapon does not decide whether or not to kill. A weapon is a manifestation of a decision that has already been made.
– Steven Galloway

I learned to play the instruments of war,” he said, “and paint in blood.
– Cassandra Clare

Never in the field of human conflict was so much owed by so many to so few.
– Winston S. Churchill

Once you hear the details of victory, it is hard to distinguish it from a defeat.
– Jean-Paul Sartre

It is only those who have neither fired a shot nor heard the shrieks and groans of the wounded who cry aloud for blood, more vengeance, more desolation. War is hell.
– William T. Sherman

Extreme violence has a way of preventing us from seeing the interests it serves.
– Naomi Klein 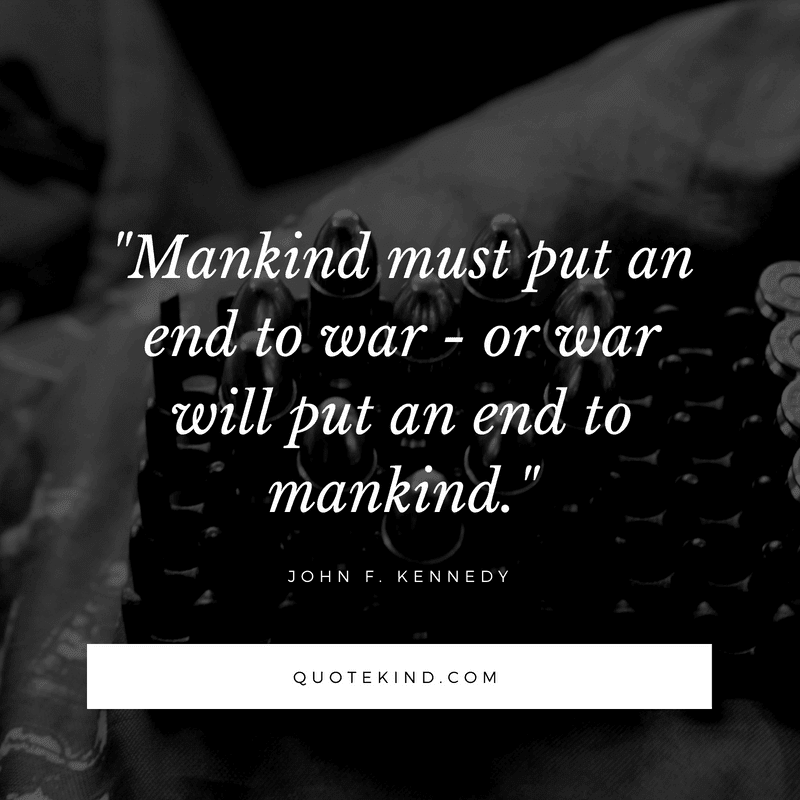 He says we need to live in the real world, where war and death are a reality, not pretend.
– Pittacus Lore

Of the four wars in my lifetime, none came about because the U.S. was too strong.
– Ronald Reagan

Ideas and not battles mark the forward progress of mankind.
– L. Ron Hubbard

Love is a conquest! Love is war!
– Marissa Meyer

Fear could break a line faster than any enemy charge.
– Sarah J. Maas

War is like a fire. One man may start it, but it will spread all over. It is not about one thing in particular.
– T.H. White