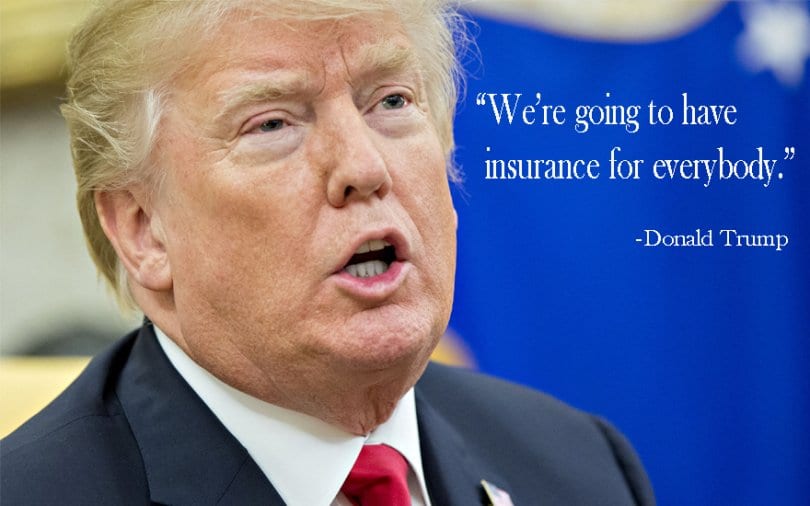 With the belief that he will create a better service for his people, Trump has made several promises which we call Trump Healthcare Quote. Trump ensure the Americans that everybody will have insurance. He tried to create a less expensive health care, which has been a dream for many people in America.

Trump has been proud that nobody understands health care better than him, so he has made some different plans. He wants to work with the doctors so that they can give better service to the Americans. He is ready to spend some money to ensure everybody’s health care is covered.

“We’re going to have insurance for everybody.”
– Donald Trump – In press conference


“We’re going to have a healthcare that is far less expensive and far better.”
– Donald Trump – In press conference

“I am going to take care of everybody. Everybody’s going to be taken care of much better than they’re taken care of now.”
– Donald Trump – in a September 2015 “60 Minutes” interview

“We are going to be submitting, in a couple of weeks, a great healthcare plan.”
– Donald Trump – Obamacare replacement

“I was the first & only potential GOP candidate to state there will be no cuts to Social Security, Medicare & Medicaid”
– Donald Trump – Before arguing that GOP also-ran Mike Huckabee was copying him.

“We don’t want anyone who currently has insurance to not have insurance.”
– Donald Trump – Via Trump counselor Kellyanne Conway


“I firmly believe that nobody will be worse off financially in the process that we’re going through.”
– Donald Trump – Via Health and Human Services Secretary Tom Price praised the House’s repeal and replace plan on Sunday’s NBC’s “Meet the Press”


“We have to get rid of the artificial lines around the states.”
– Donald Trump – During the second presidential debate

“You have to be hit by a tractor, literally, to use it, because the deductibles are so high, it’s virtually useless. It is a disaster. And remember the $5 billion website? $5 billion we spent on a website, and to this day it doesn’t work. I have so many websites, I have them all over the place. I hire people, they do a website.”

“The only way the government should be involved, they have to make sure those companies are financially strong, so that if they have catastrophic events or they have a miscalculation, they have plenty of money. Other than that, it’s private.”

“We’re going to work with our doctors. We’ve got to do something. … We’ll work something out … Nobody knows health care better than Donald Trump.”

– Donald Trump – Interview with ABC’s “This Week with George Stephanopoulos”


“We have to come up, and we can come up with many different plans. In fact, plans you don’t even know about will be devised because we’re going to come up with plans—health care plans—that will be so good. And so much less expensive both for the country and for the people. And so much better.”


“Together we’re going to deliver real change that once again puts Americans first. That begins with immediately repealing and replacing the disaster known as Obamacare … You’re going to have such great health care, at a tiny fraction of the cost—and it’s going to be so easy.”


“I told him I will look at his suggestions, and out of respect, I will do that. Either Obamacare will be amended, or repealed and replaced.”


“It’s an unbelievably complex subject. Nobody knew that health care could be so complicated.”


“The longer I’m behind this desk and you have Obamacare, the more I would own it.”

“The Republicans never discuss how good their health care bill is, & it will get even better at lunchtime. The Dems scream death as OCare dies!”


“Repeals burdensome taxes, big … Will provide better coverage for low-income Americans. By the way, low-income Americans under our plan—and we’re doing things at this meeting which I think you’ll be very happy about, because we’re going to spend some more money to make sure everybody is protected.”

Getting health care is easy for some people, but not for the rest. Sometimes it is just too expensive so that people who have low income will not be able to buy insurance. Therefore, for them, having insurance is such a luxury. However, that is not what Trump wants.

Trump Healthcare Quote mostly talk about his plans and his proposal to upgrade the quality of health service. He promised not to cut the budget for Social Security, Medicare, and Medicaid. Therefore, he does not want anybody who currently has insurance to lose his or her coverage.